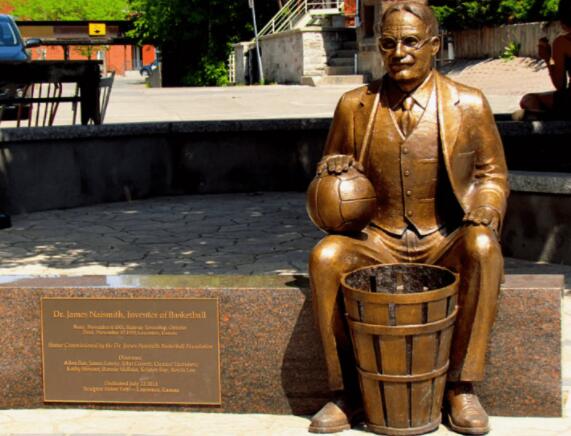 Basketball is one of the most popular sports in the United States. Millions of people play basketball every year and even more watch it on TV. the game has evolved greatly over the years to become the famous sport that millions have come to love and adore.

In terms of evolution, the part that has mostly changed over the years is mostly the hoop design.

Yeah, I know that the game was first played using soccer balls and a unique ball was developed specifically for the game but the modern hoop is nothing compared to its ancestor. But who invented the basketball hoop? What did it look like? How is it different from modern basketball hoops?

Who Made the First Basketball Hoop?

Basketball was invented by Dr. James Naismith, a Canadian physical education teacher at Springfield College in Massachusetts. He created the game in December 1891, He invented it as a safer, less injury-prone alternative to football. It was played with peach baskets as the first hoops. It later evolved and peach baskets were replaced with modern hoops which were fitted with nets.

The game was not only meant as a safer alternative to football, it was also meant to be an entertaining indoor game that was not going to be affected by the weather the same way football was affected by winter. There was an urgent urge to come up with some kind of physical game that could keep the students exercised and fit during the long winter months that used to plague the area. The students had to keep fit in preparation for the upcoming season.

The game had to be as interesting as the common warm-weather games that the students loved playing like lacrosse and football but still had to be somehow safe to avoid injuries, especially considering the game was being played indoors where the chances of breaking bones was higher. 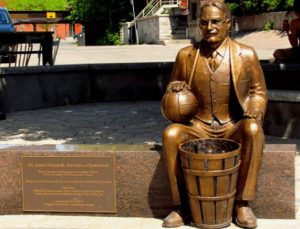 After the failure of two instructors before him to try coming up with a game that interested the students, the responsibility was placed on James’ shoulders. Records say that he asked for two square baskets but the janitor only managed to find two peach baskets. James later nailed each basket on the opposite side of the gymnasium and wrote a rule book for the game.

He incorporated the gameplay of various games like the passing of American rugby, English rugby (the jump ball), the use of a goal like in lacrosse, the shape and size of a soccer ball, and something called duck on a rock, a game Naismith had played with his childhood friends in Bennie’s Corners, Ontario. Duck on a rock used a ball and a goal that could not be rushed. The goal could not be slammed through, thus necessitating “a goal with a horizontal opening high enough so that the ball would have to be tossed into it, rather than being thrown.”

After coming up with the rules of the game, he stationed two men at the end of each goal to pick the ball and return it into play. It was not until later that the bottom of the peach baskets was cut open to allow the ball to fall through after scoring a basket.

When Was the Basketball Hoop Invented?

The basketball hoop was invented the same year the game was invented is in December 1891 by James Naismith. It was not a hoop, to begin with, but instead, the first game of basketball used peach baskets.

Initially, James intended to use 18-inch wide square boxes as goals but when he asked the janitor for the same, he was brought two peach baskets instead. Since they would serve the same purpose as the boxes, he decided to use the peach baskets instead. Who knows, maybe if he was given the two boxes instead of the baskets as he had instructed, the hoops of today could be square in shape. Just imagine square-shaped hoops instead of modern circular-shaped hoops.

What Was the Origin Basketball Hoop?

The original basket hoop to be used were two peach baskets. Initially, the inventor intended to use two 18-inch boxes but could not find any and had to improvise. That is when he settled on the peach baskets.

The hoop was invented first to mark the scoring place of the game. Since James intended the game to be a little bit complex, not just an easy scoring game where one could just score the goal by forcing the ball into the goal, he elevated the peach baskets and secured them vertically.

He did this so that the players could loop the ball into the hoop instead of just throwing it directly into goal-like lacrosse. This made the game a lot more interesting as to score the goal one relied solely on technique and not just brute force.

The Evolution of Basketball Hoop

As we have learned from the subheading above, the first hoop was made from peach baskets that were stationed on opposite sides of the court. The peach baskets were enclosed at the bottom with only the top open to allow the ball to go through. This meant that there had to be two people stationed at either side of the field to pick the ball from the baskets and returned it into play. This was tiresome and time-consuming as it meant that the game had to pause as someone climbed up to the basket to retrieve the ball. This slowed down gameplay and reduced the excitement in the pitch. It also allowed the opponents to regroup and position themselves for defense. That is why basketball then did not have the crazy score lines of modern basketball.

Later on, a small hole was cut at the bottom of the basket to allow the umpire to poke the ball out from the basket to return it into play. This improved the speed of the game as the players no longer had to wait for someone to climb up to the baskets to retrieve the ball.

It was not until 1906 that metal hoops and backboards were introduced to the game. This meant that the ball no longer had to be pocked out of the basket with a stick as it would just fall through. This meant that the game was faster allowing those who were scored to counter quickly and score themselves before their opponents regrouped to defend, hence the high score lines of today.

Later on, the net was introduced to the hoop to confirm if the ball had gone through the hoop or missed. It also slowed down the drop of the ball to stop it from bouncing out of the field.

How Has the Equipment of Basketball Changed Over the Years?

As we have seen, basketball has evolved a lot over the years. It began with peach baskets as scoring points and later evolved to modern metal hoops. The backboard was also introduced to ease scoring. This is because the game required a lot of technique to score and most of the time the players threw the ball when of balanced meaning it was hard to accurately aim. This necessitated the addition of the backboard to prevent the players from overshooting. It also guided the ball into the hoop.

Later on, nets were added to the metal hoops. This was to make it easy for the referees and players to correctly judge whether the ball had gone through the hoop or not. It also slowed down the momentum of the ball as it dropped through the hoop meaning it would not bounce out of the field.

The final thing o evolve was the ball itself. Soccer balls were the first ball-type to be used in basketball. It was not until 1894 that it was replaced by the basketball, made by Spalding.

The modern basketball hoop is truly a masterpiece. It is situated at a perfect height making it just a tad complicated to score increasing the excitement in the game. It is also precision made with every part having its own purpose.

Take the net, for instance, it’s there to confirm a basket and slow the ball as it drops through. The backboard, positioned at the back of the hoop to reduce the chances of the ball going out of play after a shot. The evolution of each aspect of basketball has contributed greatly to making the game as exciting and blood pumping as it is today.

Now that you know the invention and evolution of basketball, I am sure you are excited to get to the court and try some moves for your own. Just remember to be a good sportsman and play by the rules. All in all, enjoy yourself as you have fun with your friends at the court.