The designated area of a 4-point line is farther than of the three-point line, the reason why the player will be awarded four points for the score. This is usually made by the court. Harlem Globetrotters introduced it, and the BIG3 professional basketball league only uses it. While there are three very distinct circles in the field area, any area beyond the three circles is considered a 4 point area when a player or a part of his or her body touches this area while shooting for the hoop and makes it, the score increases by four points.

It was hugely successful in the all-star game made of celebrities, but many people are wondering whether or not they need to add it officially to the NBA. Since time immemorial, tIt NBA has always shied from this topic. The rate of points continually rises as many teams are being forced to come up with ways of actually defending their space on the basketball court. By adding more strain on defenses, the offenses use more space in the court; the results are that the players are defending their spaces in the court. It has made many people worry, but this isn’t new news as before the 3-point line was added in the 70s, many people disagreed with it.

Many people argue that it shouldn’t be added as making the shot is quite hard as the line is very far. Ray Allen was one of the people who disagreed during a celebrity all-star game. This 4-point line was only used in the game, as mentioned earlier. During this game, for any four-point shot made in the game, the potato chip promised to make a $4000 donation. It served as an incentive, and a total of 10 4-pointers were shot, and the potato chip company donated a total of $40000.

Despite Allen’s disapproval, he made the first 4-pointer. By adding the 4-point shot, the game was said to be more dramatic than the previous games. However, does this mean that the NBA should add a 4-point line? No. the game would be unbearable as most critics would argue, but maybe the NBA could implement but in a way that wouldn’t spoil the sport by the scores being too high. This is because, just as the three-pointer specialization teams will tend to ensure to have a player with four-pointer specialization; hence the scores per game might be very high. 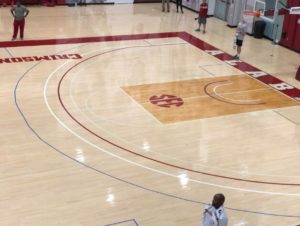 The way to do this is by maybe implementing the 4 point line at the last two minutes of both halves. It would give the team that is lagging behind a chance to earn their way to the top while it could also help the team that is ahead of a chance to prevent the behind team a chance to catch up with them. Either way, it would make the game more interesting. Another way they could add the 4-point line is by picking any time to add the 4-point line in the game. As mentioned earlier, when they added the 4-point line, the game was more dramatic. Adding random times would enable the coaches to fit the plays specifically.

Additionally, each team could be accorded their 4-point line, and they could use it at any point in the game so long as they use it only once. The coach could first ask the ref permission to use their 4-point line before actually using it. The final way, they could use the four-point line is by letting the fans pick the appropriate time. The NBA has always been looking for ways to engage and involve the fans in the game; this could be the perfect way to do so.

The NBA should consider the 4-point line as the celebrity game was enjoyable to watch. The reason is that as long as teams are competing, the ultimate purpose of sport is entertainment. As long as they don’t overdo it and make the sport cheesy. Even though adding the 4-point line would mean re-analyzing on how we viewed greatness and how we view mid-range shooters, there is no harm in actually trying it out as everything changes, as well as the sport of basketball.